This past weekend I went to the Eyes to the skies festival in Lisle, IL. It’s an annual hot air balloon festival that I’ve always heard about but had never attended before. I had fun but was unfortunately a bit disappointed and technically it’s my fault.

I was under the impression that the balloon glow included the balloons being released into the sky. This isn’t the case, the balloons are actually released at 6:30pm and the glow is later on at 8:15pm. I thought it was all at the later time, so didn’t arrive until closer to 8pm. While the balloon glow was cool, it was hard to see since the balloons were still on the ground. And the field where the view was clear was very crowded as everyone was making a mad dash to get into it. We decided to sit on the nearby basketball court thinking the balloons would go up. My bad. 🙂 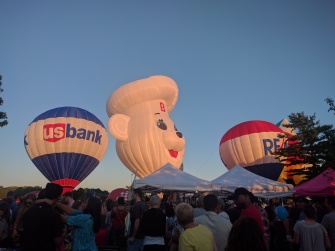 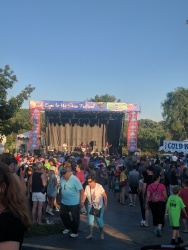 The only other thing that sucked was parking. The parking lot was a few miles away from the festival and they had school buses shuttling people back and forth. At the end of the night, the line for the buses was about two to three blocks long. Ain’t nobody got time for that.

Overall, a fun time and now that I know the actual timing may consider going back some other year. But I’d take a motorcycle next time to avoid the parking hassle. 😉

I hope everyone has a safe and happy 4th of July! What are your plans? Fireworks? BBQ? Comment below your favorite part of the holiday.