Recently, I had the pleasure of meeting a local celebrity, Peter Sagal, who just so happens to live in Oak Park, runs, and is a host of NPR’s Wait Wait … Don’t Tell Me! AND he wrote a book that is supposed to be about running, but actually touches so much more. 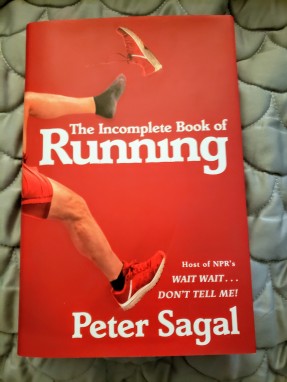 Peter has a story that isn’t completely different from mine. Although his divorce sounded much messier than mine (kids were involved) we both went through a divorce and we both turned to running to help heal our emotional wounds. While you may be thinking why or how would running help you? It’s not just the act of running but actually more so the act of running with others that helped me the most. Back in 2017, I entered the year married but separated. Married but divorce was legally pending thanks to my husband who filed right before the holidays. I was getting push back from my soon-to-be ex over credit card balances, video game systems, and microchip registration for our pets.

I was seeing my therapist weekly as well as reading a book and meditating daily, as well as working out as much as possible only to survive and rise above everything falling apart around me.

When Michael Chitwood came to my new church that I had just started attending the last two months to talk about his story and the Chicago Marathon, I felt a shift in my heart. And I heard God tell me that this was the year I was to train and run my first marathon ever. Everyone, including Michael, said it would be life changing. But I really didn’t know what he meant until I witnessed the transformation within me. There’s something about lacing up and sweating it out for minutes and then hours at a time with people. Things you never think to talk about come out. And there’s no judgment, because just when you think you’re the only one who’s going through struggles, your running friends have struggles of their own.

Through running, I’ve learned that no one is perfect. We all lace up for different reasons. Some of us run slow (me) and some run fast (Peter). But at the end, we’re all bettering ourselves. Whether we’re running the local 5K or the Boston Marathon, we are bettering ourselves. I love how Peter talks about running. He’s ran 14 marathons, and he didn’t start until he was 40. Despite all the odds, he qualified for Boston and has a crazy marathon PR of 3 hours and 9 minutes.

He also survived through his divorce that spanned years, and is now no longer running marathons, but still lacing up and inspiring others to do the same. If you’re on the fence of whether to start running or not, or if you’re an experienced runner, I would recommend this book either way. Peter provides insight into the world of running that I haven’t seen elsewhere. And writes in a very easy way to understand. This is a relatable book, even if you haven’t ran a marathon or not planning to.